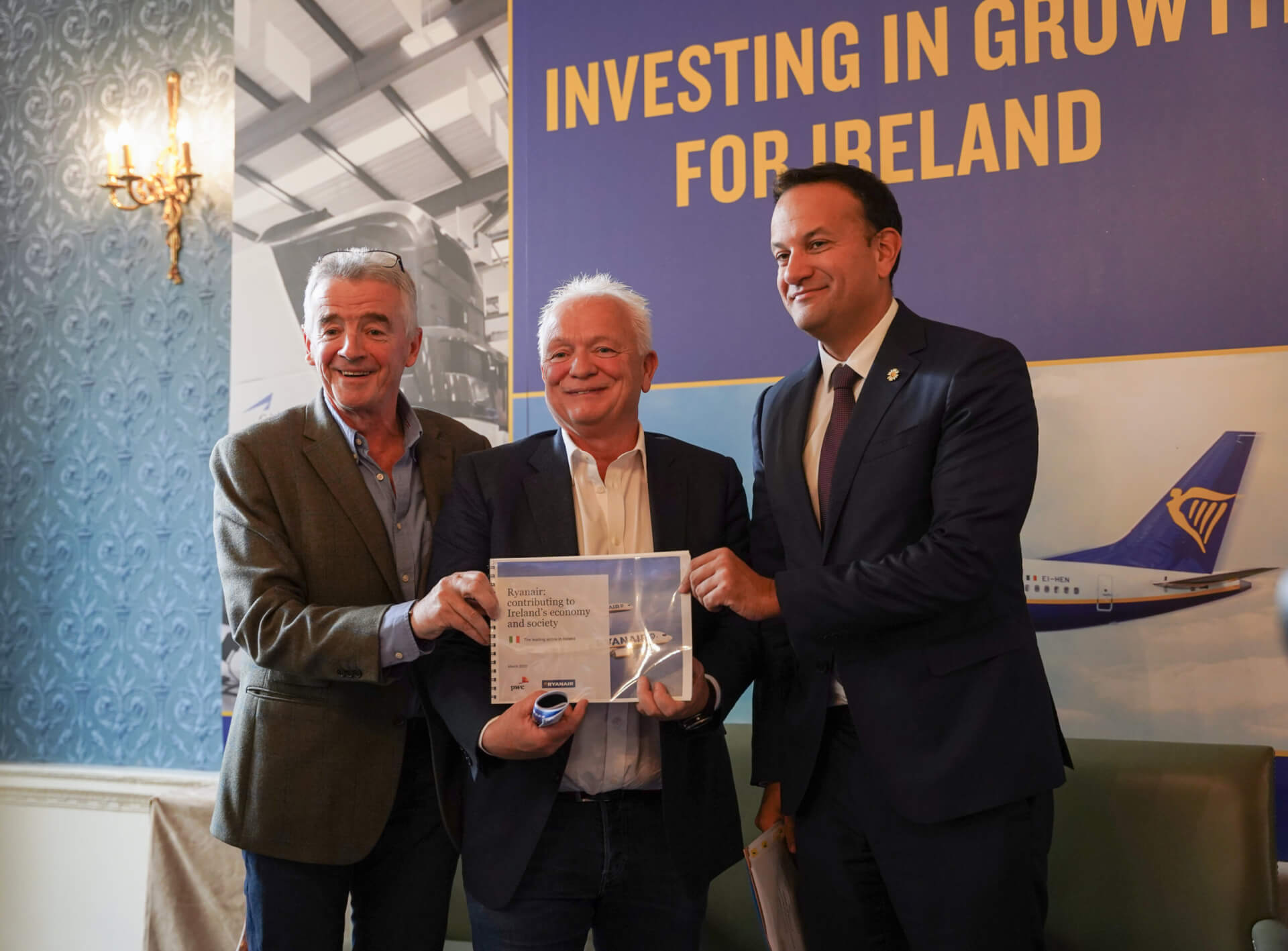 Ryanair celebrated its unmatched contribution to Ireland’s economy over the past 35 years, publishing an independent report prepared by international consultants PwC, which shows that Ryanair is one of Ireland’s largest contributors to economic growth and development since 1985 as follows;

At today’s launch of the PwC Report, quantifying Ryanair’s contribution to Ireland’s economy over the last 35 years, Ryanair’s CEO Eddie Wilson laid out exciting growth plans for the next decade which include:

An Tánaiste, Leo Varadkar said: “Ryanair is one of the world’s most innovative airlines and a formidable Irish company.

“We can be proud of Ryanair as an Irish company and as a driving force for change.

“They led the way within the EU with online booking and check-in, digital ticketing, and radical new pricing models. As an island, we rely heavily on our connectivity with Europe and the inbound tourism it brings.

“There’s more good news today with Ryanair’s commitment to grow its Irish passenger numbers to 30 million per annum, to create over 2,000 new high-skill jobs and invest further in its seven airports in Ireland.”

Ryanair DAC’s CEO, Eddie Wilson said: “Today’s PwC Report quantifies the enormous contribution made by Ryanair, our people, and our passengers to the Irish economy over the last 35 years.

“Ryanair has been one of Ireland’s most important indigenous success stories since first founded by the Ryan family in 1985.

“From very modest beginnings in Waterford, Ryanair has grown to become Europe’s largest airline, and the world’s number 5 airline by passenger volumes.

“However, we are now embarking on a new decade of growth and investment here in Ireland.

“In partnership with our main airport partners at Dublin, Cork, Shannon, and Belfast, Ryanair plans to grow Irish traffic from 20m to 30m p.a. over the next decade.

“These new guests will travel on a fleet of environmentally efficient B737 Gamechanger aircraft, which cuts fuel and CO2 emissions by 16%, and lowers noise by 40%.

“As a peripheral country on the edge of Europe, it is vital that Ryanair continues to promote low-cost environmentally efficient connectivity for Irish citizens/visitors to Europe and the world, and also that we continue to bring many millions of European visitors to Dublin and the regions of Ireland on a year-round basis.

“We call on the Irish Govt. to pursue policies to promote low-fare connectivity, and reduce the environmental impact of air travel by pushing for urgent reform of Europe’s chronically inefficient ATC system, and opposing unfair environmental taxes which penalise the most efficient point to point flights, while exempting the most polluting long-haul and connecting flights across Europe.

“We wish to thank the successive Irish Govt. for their help and support over the past 3 decades, which has allowed and enabled Ryanair to become a global leader in the airline industry, and one of Ireland’s best-known indigenous brands.”