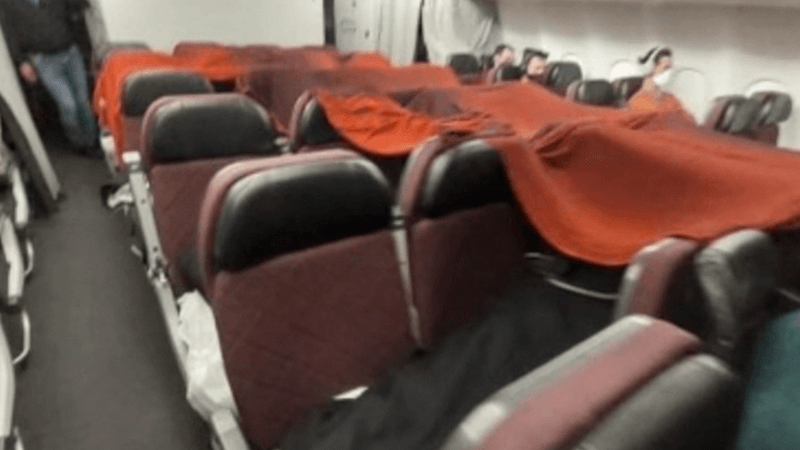 Photos showing the blanket ‘forts’ set up by the Qantas flight attendants have been released, highlighting the lack of fair rest space set up by the airline for their attendants. The photo, taken on a flight from Brisbane to Los Angles and sent anonymously, depicts the privacy the crew are trying to establish to get some much-needed rest.

Last month, Qantas resumed flying the Brisbane (BNE) – Los Angeles (LAX) route, which can take over 14 hours. Qantas is currently operating with  modified Airbus A330-200 aircraft. But those A330s, which don’t usually fly such long flights, don’t come with the exclusive crew rest areas seen on other long-haul aircraft.

Anonymous Qantas employees shared the pictures of airline blankets draped over seats at the back of the cabin with 9 News, with one commenting: “I feel like they hate us, I feel that they don’t understand what the role of flight attendant is.” Teri O’Toole, the federal secretary of the Flight Attendants Association of Australia (FAAA) called the situation “simply appalling”.

Negotiations between the staff and the employers turned sour, O’Toole reports that when the Brisbane-based crew requested a rest day in between the long-haul flights to accommodate the lack rest space, the airline hired New Zealand staff to replace them. Unfortunately, New Zealand employees are not protected by the same rest restrictions that Australian crew do, and resorted to creating their own sleeping area.

Rachel Yangoyan, a Qantas representative has announced plans to create an area at the back of the cabin with lie down beds and a pull across curtain, she is confident this measure will provide a private area that will meet the crew’s needs.