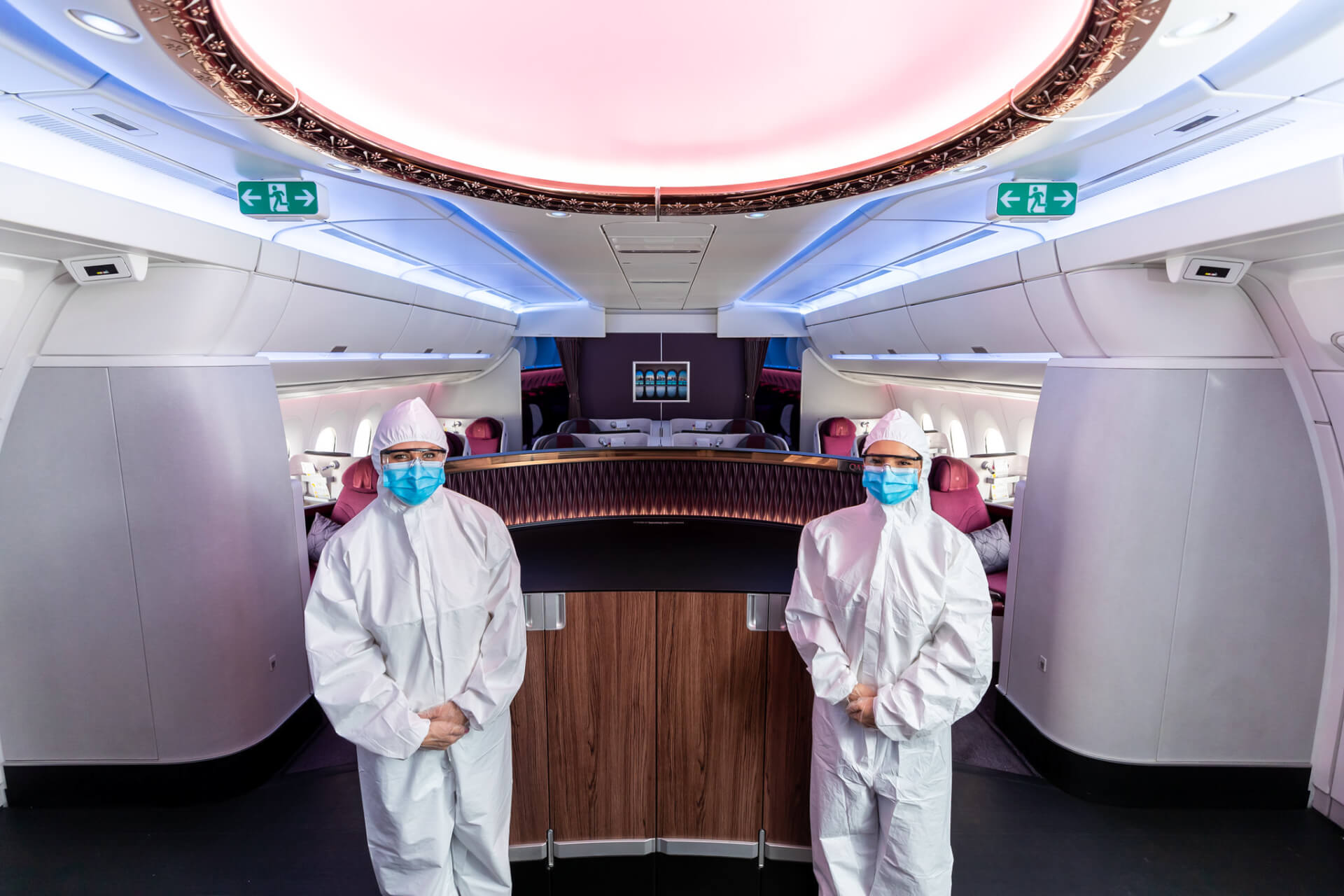 Qatar Airways has further enhanced its onboard safety measures for passengers and cabin crew. The airline is implementing several changes, including the introduction of Personal Protective Equipment (PPE) suits for cabin crew while onboard, as well as a modified service that reduces interactions between the passengers and the crew inflight. Cabin crew have already been wearing PPE during flights for a number of weeks, including gloves and face masks.

Cabin crew will wear the PPE suit over their uniforms in addition to safety goggles, gloves and a mask to provide even greater reassurance to customers in addition to enhanced hygienic measures already in place. The airline now requires passengers from Monday, May 25, to wear face coverings inflight and recommends people bring their own for fit and comfort purposes

The airline has also applied other additional health and safety measures onboard its flights, Business Class meals will be served on a tray instead of a table set up, and a cutlery wrap will be offered to passengers as an alternative to individual cutlery service, in an effort to reduce contact between the crew and the passengers. While in Economy Class, all meals and cutlery are served sealed as usual. Additionally, large bottles of hand sanitiser will be placed in the galleys and made available for both cabin crew and passengers. All social areas onboard the aircraft have also been closed to observe social distancing measures.

Passengers flying Business Class can avail of the enhanced privacy the Qsuite provides include sliding privacy partitions and fully closing doors creating a private sanctuary. Passengers can also opt to the ‘Do Not Disturb (DND)’ indicator in their private suite, if they wish to limit their interactions with the cabin crew.

Qatar Airways Group Chief Executive, His Excellency Mr. Akbar Al Baker, said: “At Qatar Airways, we have  introduced these additional safety measures onboard our flights to ensure the continued health and wellbeing of our passengers and cabin crew, and to limit the spread of coronavirus. As an airline, we maintain the highest possible hygiene standards to ensure that we can fly people home safely during this time and provide even greater reassurance that safety is our number one priority.

“Seeing as we are still flying the world’s largest international network by operating flights to more than 30 destinations around the world, and aiming to grow our network again in the coming months, these onboard safety measures will assist us in achieving our goals.”

Qatar Airways’ aircraft feature the most advanced air filtration systems, equipped with industrial-size HEPA filters that remove 99.97% of viral and bacterial contaminants from re-circulated air, providing the most effective protection against infection. All the airline’s onboard linen and blankets are washed, dried and pressed at microbial lethal temperatures, while its headsets are removed of ear foams and rigorously sanitized after each flight. These items are then sealed into individual packaging by staff wearing hygienic disposable gloves.

Meal service utensils and cutlery are washed with detergents and rinsed with demineralized fresh water at temperatures that kill pathogenic bacteria.

Cabin crew have received training on how to minimise their chances of contracting or spreading the infection, are thermally screened before the departure of flights and after their arrival, and are quarantined and tested if any colleagues or passengers on a flight shows any symptoms of infection or test positive for the virus.

In addition, Qatar Airways has revised its distribution of cabin crew on flights, sending two groups on short-haul and medium-haul flights – the first to manage the outbound trip, the second to manage the inbound trip. For long-haul flights, crew members who have to stay overnight in a foreign city can only travel in Qatar Airways-approved transport and must remain in their rooms, limiting human interactions.

In terms of passengers, Qatar Airways is encouraging social distancing where possible, especially on flights with lighter loads. Distancing is also implemented during the boarding process, ensuring passengers are allocated seats far apart from each other. The airline is also encouraging passengers to follow hygiene practices recommended by the World Health Organization (WHO), such as regular hand washing and refraining from touching the face.

Since mid-February, Qatar Airways has helped reunite over one million passengers with their loved ones, operating a mix of scheduled and charter services plus extra sectors.

A multiple award-winning airline, Qatar Airways was named ‘World’s Best Airline’ by the 2019 World Airline Awards, managed by the international air transport rating organisation Skytrax. It was also named ‘Best Airline in the Middle East’, ‘World’s Best Business Class’, and ‘Best Business Class Seat’, in recognition of its ground-breaking Business Class experience, Qsuite. It is the only airline to have been awarded the coveted “Skytrax Airline of the Year” title, which is recognised as the pinnacle of excellence in the airline industry, five times.

Hamad International Airport (HIA) has been ranked the “Third Best Airport in the World”, among 550 airports worldwide, by the SKYTRAX World Airport Awards 2020. Rising from fourth position in 2019 to third in 2020, HIA has been steadily rising in the ‘World’s Best Airports’ rankings since the start of its operations in 2014. Additionally, it has been voted the ‘Best Airport in the Middle East’ for the sixth year in a row and ‘Best Staff Service in the Middle East’ for the fifth year in a row. HIA also continues to retain its five-star airport classification since 2017.