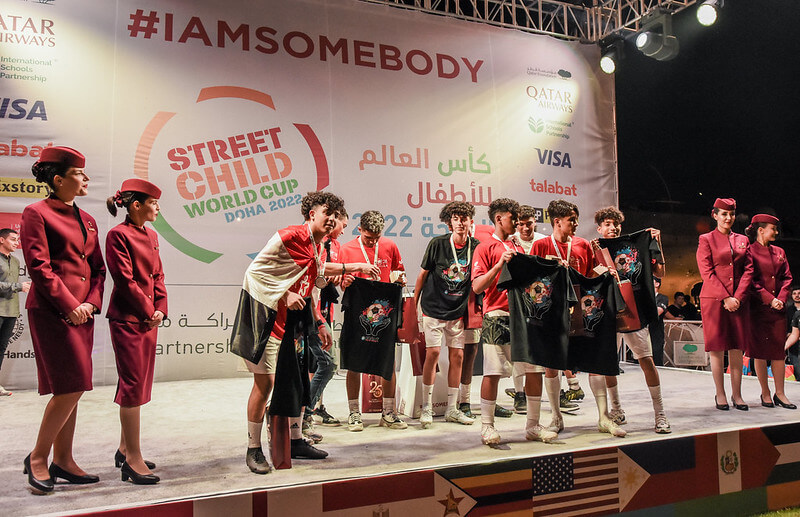 Youth-led football teams from across the globe, representing some of the world’s most vulnerable children, flew with Qatar Airways to participate in a sporting tournament with a call for change – The Street Child World Cup Doha 2022.

In partnership with Qatar Foundation, the event was held at Oxygen Park between 7 to 15 October and brought together 28-teams representing 25 countries and provided a platform to champion the rights of street connected youth.

Qatar Airways cabin crew celebrated with the winners of the Girls and Boys tournaments, claimed by Team Brazil and Team Egypt respectively.

In addition, Qatar Airways sponsored the event attended by over 280 young people to experience a week of art and cultural exchanges, a child-friendly congress, and championed the power of football.

“The beautiful game teaches the youth self-confidence and lifelong friendships while also paving the way for a bright future by opening worldwide opportunities. Supporting this tournament allows us to leave a lasting legacy ahead of the FIFA World Cup here in Qatar and with the children across the globe.”

Street Child United’s Founder and CEO, Mr. John Wroe, said: “We are delighted to have Qatar Airways as our Official Airline Partner helping us bring our 28 teams from 25 countries together in Qatar.

“For the majority of our young people, this will be their first time leaving their home country.

“Their first time on a plane! To have Qatar Airways support their life-changing journey to the Street Child World Cup is something we are extremely grateful for.”

Beyond the seven-a-side format competition, the Street Child World Cup aims to inspire participants to become resourceful role models within their communities and for young people globally.

The art festivities of the event included mural displays, performances, and exhibitions.