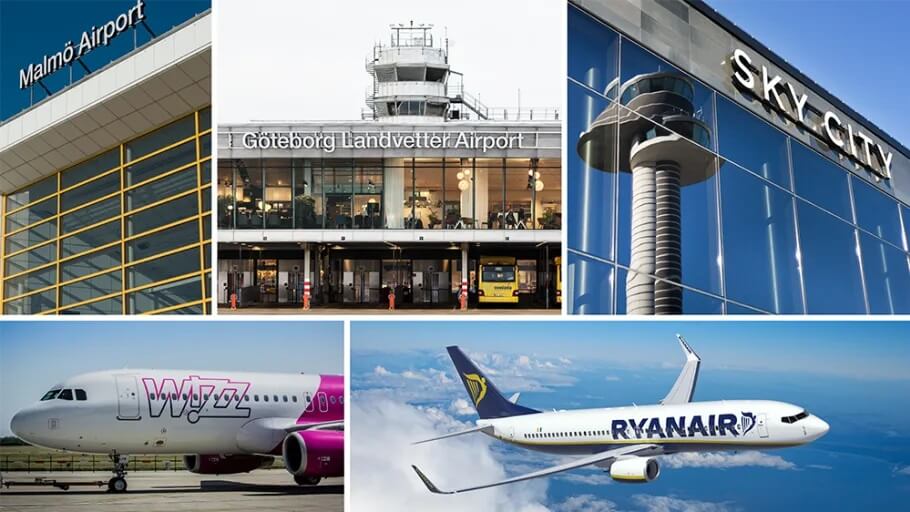 Ryanair continues to invest in the Swedish market by adding more destinations to Stockholm Arlanda and Göteborg Landvetter.

A new route to Barcelona premiere in conjunction with the opening of the new base and close to twenty-five new routes at Stockholm Arlanda Airport later this autumn.

At the same time, the Irish low-cost carrier continues to expand also at Göteborg Landvetter Airport with additional routes for the autumn, now adding Kaunas in Lithuania.

Wizz Air continues to expand its network at Malmö Airport and increases service with a route to Sarajevo.

Ryanair will start flying to Stockholm Arlanda Airport during the winter season 2021 when it will open a base.

With the addition of Barcelona, it will involve close to twenty-five European destinations launched by the end of October or beginning of November.

In conjunction with the set-up of operations, Ryanair will also launch domestic service in Sweden for the first time, to Gothenburg and Malmö from Stockholm Arlanda.

In addition to the planned new domestic route to Stockholm in autumn, the airline is at the same time launching service to Riga and Billund and now adding also Lithuania’s second city, Kaunas.

Hungarian low-cost carrier Wizz Air also see more opportunities in the Swedish market and are increasing their service with a new route to Sarajevo from Malmö Airport this winter, starting before Christmas.

“That Ryanair choose to add more destinations to the large number of routes they are opening this autumn at both Stockholm Arlanda and Göteborg Landvetter, and that Wizz Air choose to launch another new route so shortly after they started operations to Banja Luca – shows a clear demand for travel, and is really a sign of the Swedish market’s strong position”.