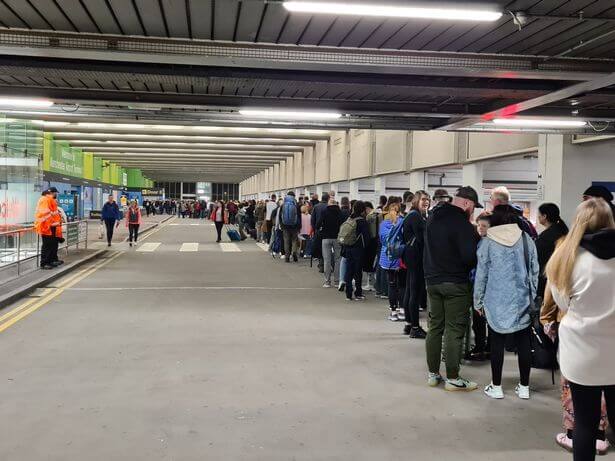 Ryanair passengers complained of being sandwiched in with ‘no ventilation’ as chaos at Manchester Airport continues.

Holidaymakers travelling from the airport’s Terminal Three on Tuesday were reportedly left standing for 90 minutes after four flights scheduled to leave from the same gate at a similar time were delayed.

One man said he’d ‘never seen anything like it’ amid claims that people were calling out for assistance saying they weren’t feeling well, and people using assistance trolleys were unable to get through, reports Lancs Live.

He said the departure gate had no ventilation and despite Ryanair operating a mask only flight policy, passengers were left queueing in the waiting area with ‘zero’ coronavirus precautions.

It comes as holidaymakers reported further chaos at the airport, with huge delays, problems with baggage, and long queues due to ongoing staff shortages.

Gino Deblas, who was flying to Naples in Italy from gate 44, described scenes of carnage ahead of his Ryanair flight which was scheduled to leave at 5.45pm.

He said: “That gate shares four departure doors. At the time there were four flights scheduled at around the same time as each other

“One to Naples, Krakow, Palma and the fourth I can’t remember. Effectively they called everyone as a last boarding call and packed everyone into one area.

“There was limited mask wearing inside the terminal departure area making it extremely difficult for anyone who was trying to stay Covid safe whilst travelling.”

Gino said travellers spent around one and a half hours stood in a ‘packed area’ with ‘no indication’ of how long the delays would continue for. “More and more people were being called to the other gates,” he said.

“In the 30 plus years of flying, which is around 40 flights a year since 2005 for work, I haven’t seen anything like it. Ryanair operate a mask only flight policy but they were happy to have people queue in a waiting area with zero Covid precautions.

“There were several individuals in assistance trolleys who couldn’t get through and several more people were calling out not feeling well, I saw one person requiring assistance but I’m not sure what happened after that because I couldn’t see anything.”

Holidaymakers are currently being advised to arrive at Manchester Airport three hours before their flight is scheduled to leave, after bosses warned problems with staff shortages and high passenger volumes are set to continue for weeks.

Chief Executive of Manchester Airport Charlie Cornish has apologised to passengers for the ongoing disruption.

He said: “I cannot apologise enough for the disruption people have faced. The simple fact is that we don’t currently have the number of staff we need to provide the level of service that our passengers deserve.

Mr Cornish added: “I also want to be clear that a huge amount of work is going into improving the situation in the short-term. Our focus for the next four weeks is on delivering a more predictable and reliable level of service for passengers.”

A spokesperson for Manchester Airport said: “We are aware of some departing flights from Terminal Three having been delayed yesterday, and that some passengers had a lengthy wait at the gate as a result.