Ryanair Holdings yesterday held its 2018 AGM during which shareholders approved all resolutions by large majorities including approving David Bonderman as chairman and Michael O’Leary as chief executive officer.

As previously disclosed in the company’s 2018 Annual Report, Charlie McCreevy and Declan McKeon chose not to seek re-election at the AGM.

Chairman David Bonderman thanked both Charlie and Declan for their substantial contribution over the last eight years and welcomed both Emer Daly and Róisín Brennan as new members of the board.

Details of the voting is set out in the table below. 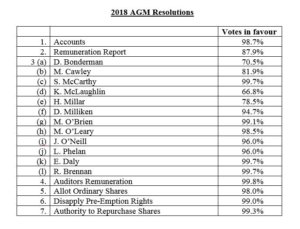