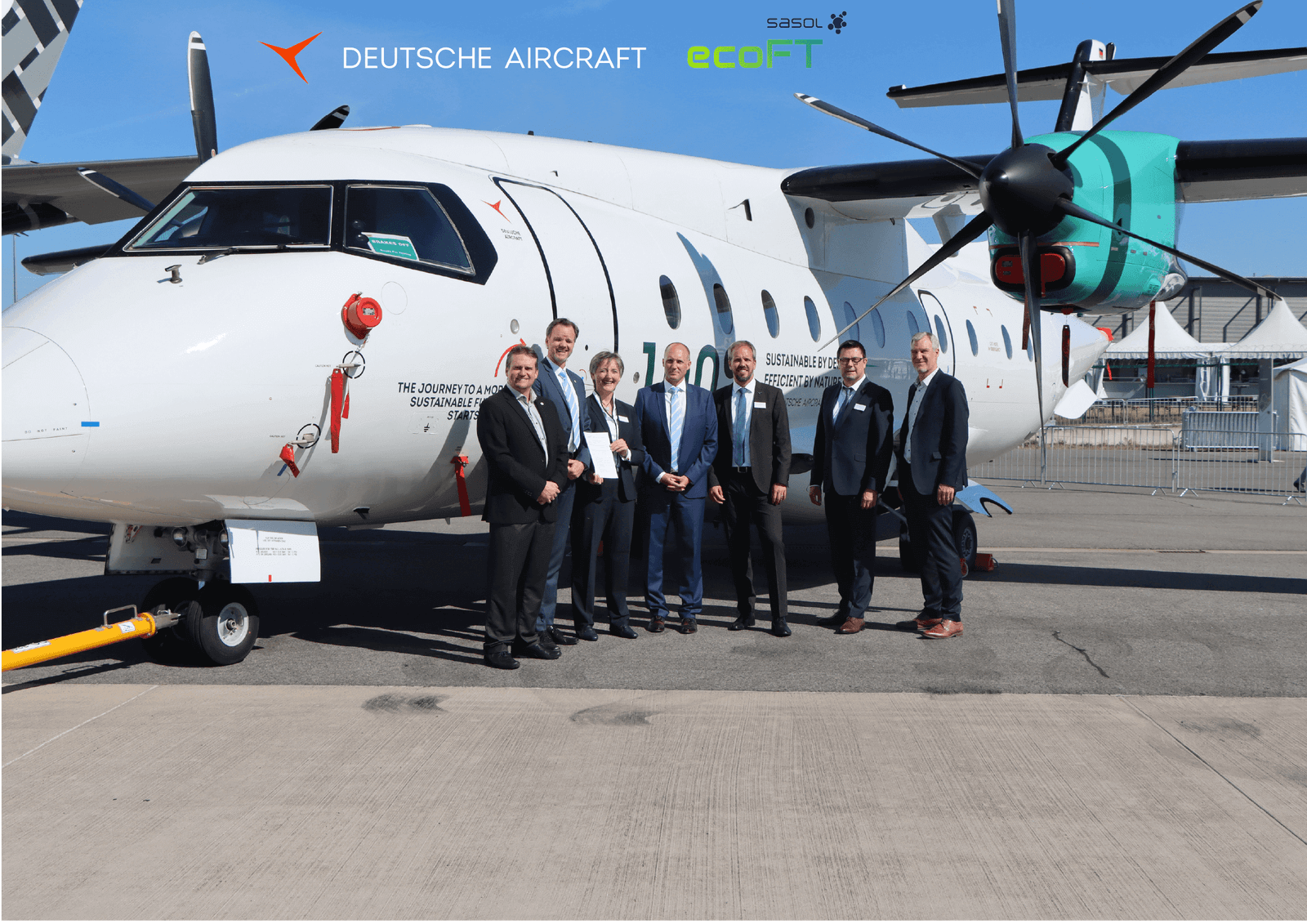 Sasol ecoFT and Deutsche Aircraft have both recognised the urgency in transitioning towards climate neutral aviation.

The two companies thus plan to foster the certification of sustainable drop-in and non-drop-in jet fuels, more particularly the ramp-up of PtL-SAF for aviation.

With its D328eco program, Deutsche Aircraft is working on an aircraft in the under 50-seat market, that will achieve near carbon neutrality.

The aircraft, which is scheduled to be certified in 2026, will be able to use 100% H2-SAF (PtL) on top of any other certified sustainable aviation fuel and regular kerosene.

Sasol ecoFT is an ideal partner for that task as the South African company is the world leader in FT (Fischer-Tropsch) technology.

From a fossil heritage to a sustainable future

“We both have products originally designed in the age of fossil fuels.

“Together we can develop rapid solutions to combat climate change by improving our products while building on our heritage and expertise.”

PtL-SAF is a scalable, and thus long-term solution to minimise the carbon dioxide (CO2) footprint of aviation.

The process uses for example CO2 recycled from regular air, and hydrogen, produced with green energy, to form a synthetic fuel.

Fuels manufactured like this still have the similar characteristics as regular kerosene: high energy density at low volume, proven safety, and distribution by established infrastructure.

Deutsche Aircraft and Sasol will not only work on technology and production aspects of H2-SAF (PtL), but also aim at a certification for this type of fuel to be used as drop-in or non-drop-in jet fuel.

PtL-SAF is chemically similar to Coal-to-Liquid (CtL), in which Sasol has deep global experience at deploying at industrial scale.

As a first step of their partnership Sasol ecoFT and Deutsche Aircraft will explore the compatibility of materials and system components with blended synthetic fuels produced through Sasol’s FT technology currently applied in its existing CtL process.

The priority of this aspect of the project is to expedite the certification of more sustainable PtL-SAF options.

“We are extremely excited about the partnership with Deutsche Aircraft as we take a holistic approach to climate-neutral aviation by looking at the whole value chain from fuel production up to aircraft system level,” concluded Helge Sachs, Senior Vice President, of Sasol ecoFT.

“Joining forces between aircraft manufacturers and fuel producers is vital, if we want to ensure that aviation becomes sustainable, while ensuring the highest possible safety standards.”