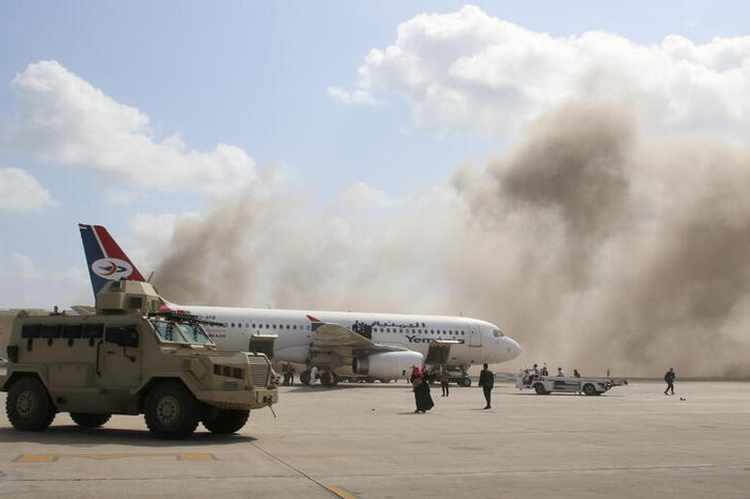 By Staff Writer, Arab News
RIYADH: A Saudi-backed team of engineering experts has been drafted in to assess and repair the damage to Aden’s airport following Wednesday’s deadly missile attack.
The specialists’ work is being carried out as part of the Saudi Program for the Development and Reconstruction of Yemen (SDRPY).

Yemen blames Iranian military experts for masterminding the strike which left dozens of people dead and injured. A number of guided missiles hit the airport moments after a plane carrying cabinet members of the newly formed Yemini government had touched down.
During the first meeting of his government in Aden, Yemeni Prime Minister Maeen Abdul Malik Saeed said initial information showed that Tehran was behind the attack.

In a statement to the Saudi Press Agency (SPA), the SDRPY said an operation to assess damage caused to the airport was being carried out in coordination with the Yemeni government, local authorities in the governorate, and Aden airport’s administration.

“An engineering team affiliated with the Saudi Program for Development and Reconstruction of Yemen was urgently present within 24 hours of the explosion at the airport site,” the statement added.

A team of contractors, consultants, and technical experts will supervise the repair work. Aden is the second-largest airport in Yemen after Sanaa which is under the control of the Iran-backed Houthis.

“The team worked on an urgent intervention to remove rubble from the site, and implemented all repairs to the affected areas, including repairing infrastructure and electrical, mechanical, and sanitary works,” the statement said.

The team surveyed the entire site to determine what works were needed before the airport could be safely reopened.

The SDRPY’s general supervisor had signed a contract to implement the second phase of the Aden International Airport rehabilitation project earlier this week, at a cost of SR54.4 million ($14.5 million), during a ceremony that took place at the center’s headquarters in Riyadh and was attended by Yemeni ministers, ambassadors representing several countries, and other officials.

The first phase of the project involved meeting international airport safety requirements including the provision of emergency vehicles. The second stage will concentrate on compliance with International Civil Aviation Organization regulations to help improve the airport’s capacity and quality of services.

The SDRPY has been involved in more than 193 projects covering education, health, water, energy, transport, agriculture, and fisheries.

“The program adopts best practices of development, reconstruction, and intellectual leadership in the field of sustainable development in Yemen, reinforcing the historical, cultural, and economic relationship between Saudi Arabia and Yemen,” the statement said.

Airports have halved emissions between 2010-2019