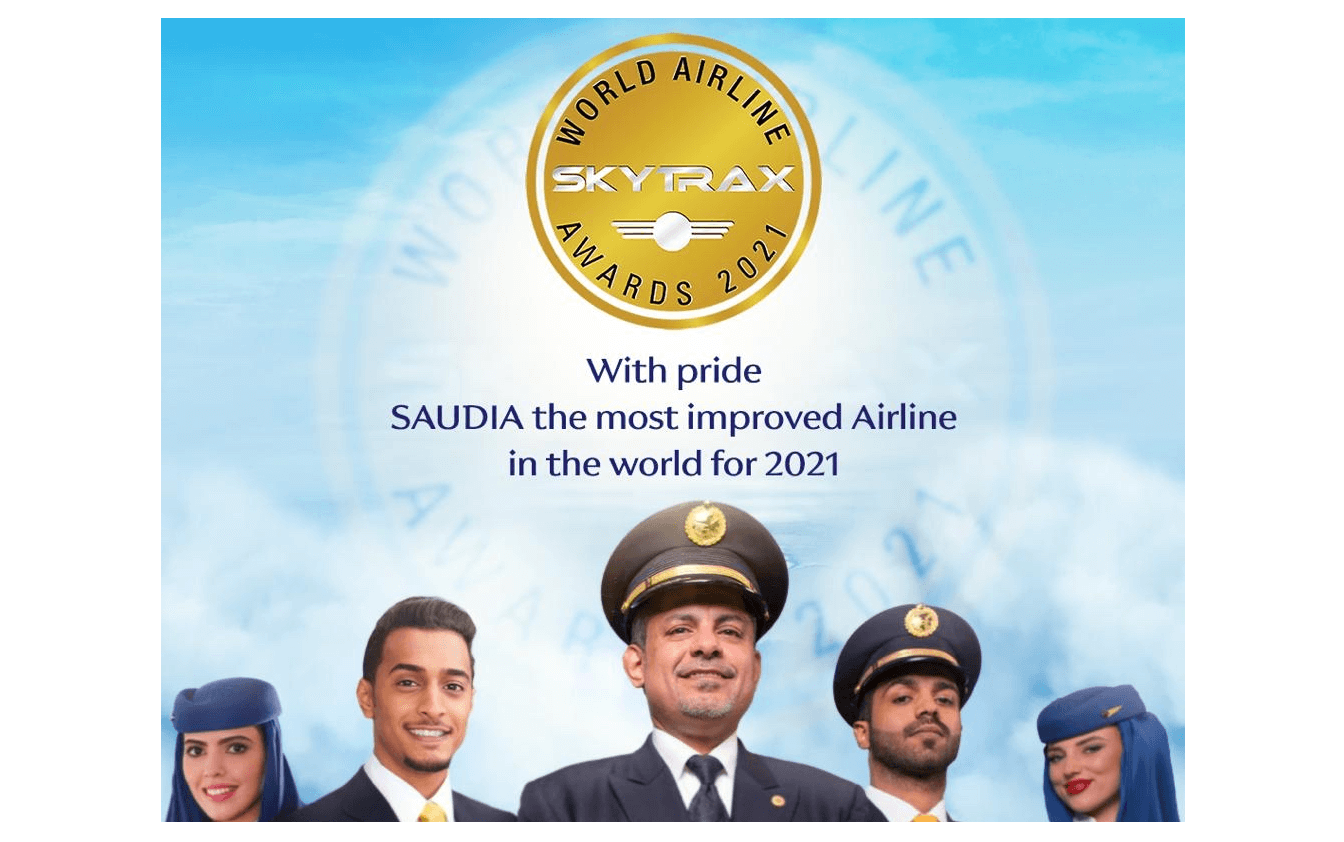 Skytrax announced today that SAUDIA is the World’s Most Improved Airline of 2021. This is the second time that SAUDIA has won this award since 2017.

That year, the Saudi flag carrier impressively jumped from the 82nd to 51st position, a 40% improvement.

This year, however, SAUDIA improved by a stunning 55% and is now 26th in the Skytrax ranking of global airlines.

The award cements the airline’s status as a full scale global carrier, constantly innovating its onboard service and culinary offering.

Being awarded this accolade award reflects the dedication to quality and performance improvements in different award categories including cabin crew, food & beverage, in-flight entertainment and more.

The Skytrax award comes as a milestone in SAUDIA’s on-going transformation which has led to several other awards and recognitions.

With a route network of more than 95 destinations and a fleet of 145 aircraft – operating one of the youngest fleets in the world – SAUDIA is on an upwards trajectory of continued growth in international markets.

Saudi Arabian Airlines Director General, His Excellency Eng. Ibrahim Alomar said: “It is an honor to receive this award on behalf of the entire SAUDIA team who have demonstrated exceptional commitment to the pursuit of the highest standards globally – from health and safety to the product and experience.

“I would also like to express SAUDIA’s deep appreciation and gratitude to The Custodian Of The Two Holy Mosques, King Salman bin Abdulaziz, and His Royal Highness the Crown Prince Mohamed bin Salman for their continuous support to SAUDIA, the Kingdom’s flag carrier.

“My congratulations also to SAUDIA’s Chairman His Excellency Eng. Saleh Al Jasser and the rest of the Board of Directors on this achievement.”

Continued Eng. Alomar: “As part of the airline’s SV2020 Strategy & Transformation Plan, SAUDIA has invested in new aircraft, product innovation and service enhancements with a single purpose – to provide all of our guests with the highest level of hospitality and comfort in the skies.

“We are delighted that the world is noticing and recognizing our efforts.”

Commenting on the award, Edward Plaisted, CEO of Skytrax said: “SAUDIA continues to increase its global status and appeal amongst customers. Apart from overall improvement in the main survey, the airline performed well in many other survey sections which are considered for this award. It is a fabulous achievement for SAUDIA to be named the World’s Most Improved Airline.

“Customers definitely recognize this improvement across the end-to-end passenger experience.”