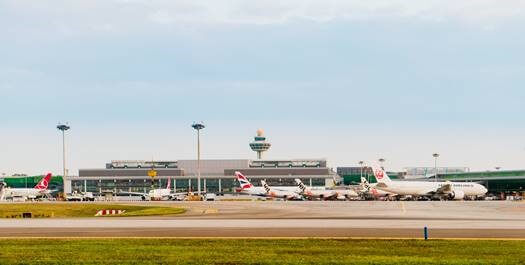 Singapore Changi Airport handled 1.65 million passenger movements in March 2020, a decrease of 70.7% compared to the same period last year. Aircraft movements declined by 49.9% to 16,200 landings and takeoffs, while airfreight throughput dropped 19.1% to 149,000 tonnes for the month.

Air travel demand remained significantly impacted by the Covid-19 pandemic, with all regions recording steep declines in March. For the last seven days of the month, passenger movements at Changi Airport were 98% lower than they were a year ago. Flight movements similarly declined sharply during the same period, by 87% year-on-year. The fall in airfreight throughput during the month was impacted by the decrease in bellyhold capacity on passenger flights. Both import and export flows have also seen contraction.

For the first quarter of the year, Changi Airport registered 11.0 million passenger movements, a decrease of 32.7% year-on-year. Aircraft movements declined 20.1% to 75,900 while airfreight throughput fell 8% to 453,000 tonnes.

Due to stricter travel restrictions put in place by countries around the world, airlines have cancelled many flights. For the month of April 2020, the number of scheduled flights at Changi Airport is about 96% fewer compared to what was originally scheduled.