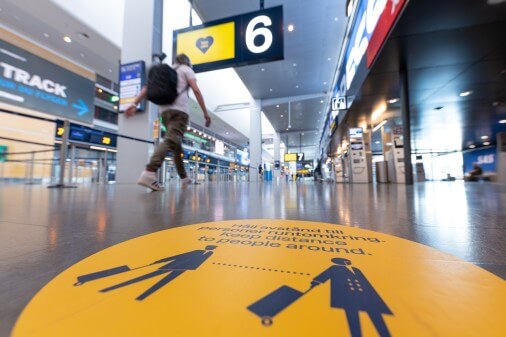 Swedavia has reported a 90 per cent decrease in passenger numbers at its 10 airports for February.

The Swedish airport operator said a total of 271,000 passengers flew from its facilities in the month, down from the 2.63 million recorded in February 2020, the last month that commercial flying remained mostly unaffected in Europe by the Covid-19 pandemic.

The February figures also mean that in the last year, passenger numbers are down by more than 34 million for Swedavia.

Swedavia president and CEO Jonas Abrahamsson said: “The weaker trend in air travel at the start of the year continued in February, with the decrease in passenger volume still at around 90 per cent.

“Signals of improved booking demand for the summer and airlines’ plans for traffic at our airports are naturally very gratifying. After a year of this pandemic, there is pent-up demand to meet, especially for travel to visit friends and family.

“But there is still a great deal of uncertainty about the market trend. A broader recovery for air travel and the opening up of countries and societies are completely dependent on the pandemic and the vaccination efforts now under way.”

Domestic travel decreased 85 per cent to 130,000 passengers compared to February last year, when the number of domestic passengers was 884,000.

Bromma Stockholm Airport was the airport that continued to show the greatest passenger decrease in February, with a decrease of 97 per cent.

At Swedavia’s seven regional airports, the number of passengers decreased between 75 and 94 per cent to a total of 61,000 passengers in February.