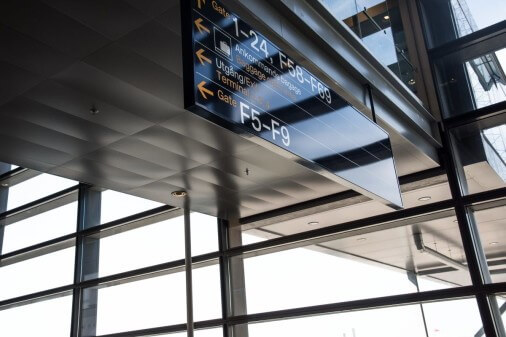 During the quarter as whole, 6.6 million passengers flew to or from Swedavia’s airports, but during the second half of March, all air traffic nearly came to a standstill as a result of the Covid-19 pandemic. This is reflected in sales revenue, with Swedavia’s net revenue declining during the period to 1,245 million Swedish kronor. Along with the priority work to help limit the spread of the disease and ensure people’s health and safety, the quarter was dominated by measures to adapt operations to a minimum based on the drastic downturn in traffic. After the end of the period, on April 29 the decision was made to pause the projects for a new pier and new baggage system at Stockholm Arlanda Airport.

With more than 6.6 million passengers for the period January-March, passenger volume decreased 25 per cent compared to the same period in 2019. A decrease in passenger volume related to Covid-19 was noted towards the end of February, but the full impact was only apparent during the second half of March, when more than 90 per cent of air traffic was suspended.

“For Swedavia and our airline customers, tenants and a number of other companies and organisations at and in the vicinity of our airports, large parts of our market and revenue have quickly and drastically disappeared,” says Jonas Abrahamsson, Swedavia’s President and CEO. “We have therefore carried out a number of measures to adapt Swedavia’s operations to a minimum, while ensuring that we are prepared to help get the Swedish economy up and running and safeguard future competitiveness again once things have turned around.”

Swedavia has furloughed around 2,100 employees and put a freeze on new investment decisions, recruitment and consultant solutions. Meanwhile, Swedavia is carrying out a comprehensive review of its existing investment portfolio. On April 29, the decision was made, under the scope of Stockholm Arlanda’s Development Programme, to pause the projects to build Pier G at Terminal 5 and a new baggage system in Terminal 5. The review continues, and Swedavia will provide additional information when further decisions are made. At the larger airports, Swedavia has concentrated operations in certain parts of those airports in order to ensure access by air in a more resource-efficient way based on the limited demand that still exists. Swedavia has also given notice to 800 employees in order to have room for manoeuvre given continued uncertainty about the market trend.

For the period January-March, Swedavia reported net revenue of 1,245 million kronor (1,474) and operating profit of 275 million kronor (70). Despite significantly lower revenue from airport operations towards the end of the quarter, Swedavia posted higher operating profit compared to the same period last year, due largely to a capital gain of 422 million kronor from the sale of Airport Hotel 2 AB, which owns the hotel property with the recently opened Comfort Hotel at Stockholm Arlanda Airport.

“In addition to profits from our property development, an efficiency improvement programme and adjusted airport charges had a positive effect on operating profit,” says Jonas Abrahamsson. “Excluding the capital gain and restructuring costs, Swedavia’s underlying operating profit was -132 million kronor.”

Swedavia is trying to provide relief for customers and support its partners, for instance, by providing discounts or temporarily eliminating certain fees or rent, in part with assistance from the Swedish government’s aid package for rent reductions.

“There are many companies and other organisations that are closely linked together, and we are all important in ensuring that the aviation industry’s ecosystem functions. I feel great sympathy for all of the businesspeople at and in the vicinity of our airports who are fighting right now for the survival of their operations,” says Jonas Abrahamsson. “While society, companies and not least employees are now facing serious challenges, we know that once the pandemic is over, it will still be important for people to be able to meet and for the industry to continue its transformation to make aviation sustainable.”