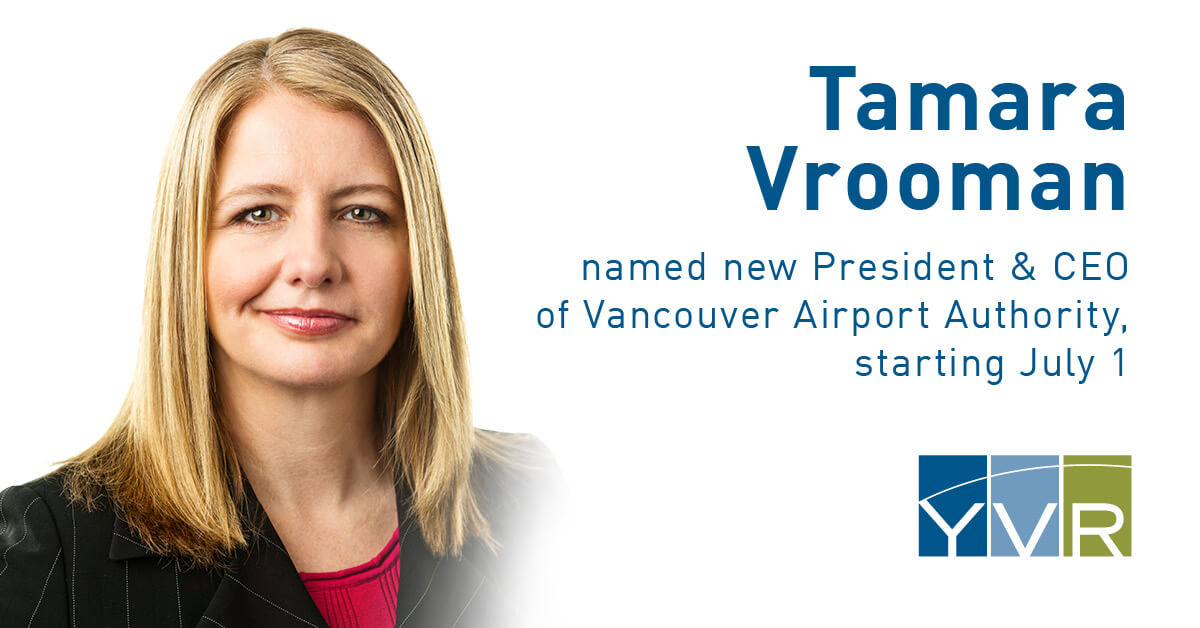 The Board of Directors of Vancouver Airport Authority today announced the appointment of Tamara Vrooman as President & Chief Executive Officer, effective July 1, 2020. Ms. Vrooman succeeds Craig Richmond who announced in November 2019 that he will be retiring at the end of June after seven years leading the organization that operates Vancouver International Airport (YVR).

“Tamara is a visionary executive with an exemplary track record leading large, complex institutions in both the private and public sectors, including through periods of enormous challenge, innovation and growth,” said Annalisa King, Chair of the Board of Directors. “By applying deep strategic, operational and financial abilities, matched by bold positions on sustainability and inclusion, she has led transformative change resulting in global recognition and commercial success, all while doing good. This, combined with her comprehensive understanding of YVR gained by her nine-year tenure on its Board of Directors, will enable her to reimagine YVR as a benchmark airport of the future. With a career-long commitment to the betterment of British Columbia, she is the ideal person to lead YVR forward.”

Ms. Vrooman joins YVR following 13 years as President and Chief Executive Officer of Vancity, Canada’s largest community credit union. She assumed leadership of Vancity at the beginning of the global financial crisis and transformed the business and service model, delivering record profitability and doubling its assets. During her tenure, Vancity has become a global reference point, and Ms. Vrooman has been a leading voice in the Canadian and international financial sectors, demonstrating a successful new vision for values-based banking. Today, Vancity manages more than $28 billion in assets, with more than 2600 employees, and 530,000 members at over 60 locations.

“I am honoured to lead the talented team that has made YVR the best airport in North America for 10 years running,” said Ms. Vrooman. “I look forward to working with them as we reimagine our business and how we operate in this challenging new environment as the world adapts following the COVID-19 crisis. I know from experience that crises provide an opportunity for innovation, creativity and renewal. I am eager to get to work as we chart a path forward that supports safe and efficient passenger and cargo travel, while recognizing YVR’s important role in the Lower Mainland, BC and the global markets we serve.”

Added Ms. King: “On behalf of the Board I would also like to thank Craig Richmond for his immense contributions to YVR during his time as CEO and, in particular, for his leadership during this difficult COVID-19 pandemic. All of us associated with YVR wish Craig well in his future endeavours.”

The Board of Directors conducted a global search for Mr. Richmond’s replacement with the assistance of a leading international executive search firm. Ms. Vrooman recused herself from Board activity in 2019 in order to participate as a candidate in the executive search process. She will be the first woman to lead YVR.

Prior to joining Vancity, Ms. Vrooman served as Deputy Minister of Finance for the Province of British Columbia where she oversaw the government’s annual $100 billion borrowing and cash requirements and its $36 billion fiscal plan. Ms. Vrooman has been a leading voice in BC, Canada and abroad for sustainable finance and investing, climate change measurement and reporting, and diversity and inclusion. She was named Business in Vancouver’s BC CEO of the Year (Major Private Company) in 2015. Ms. Vrooman was recognized with the Order of British Columbia in 2019.