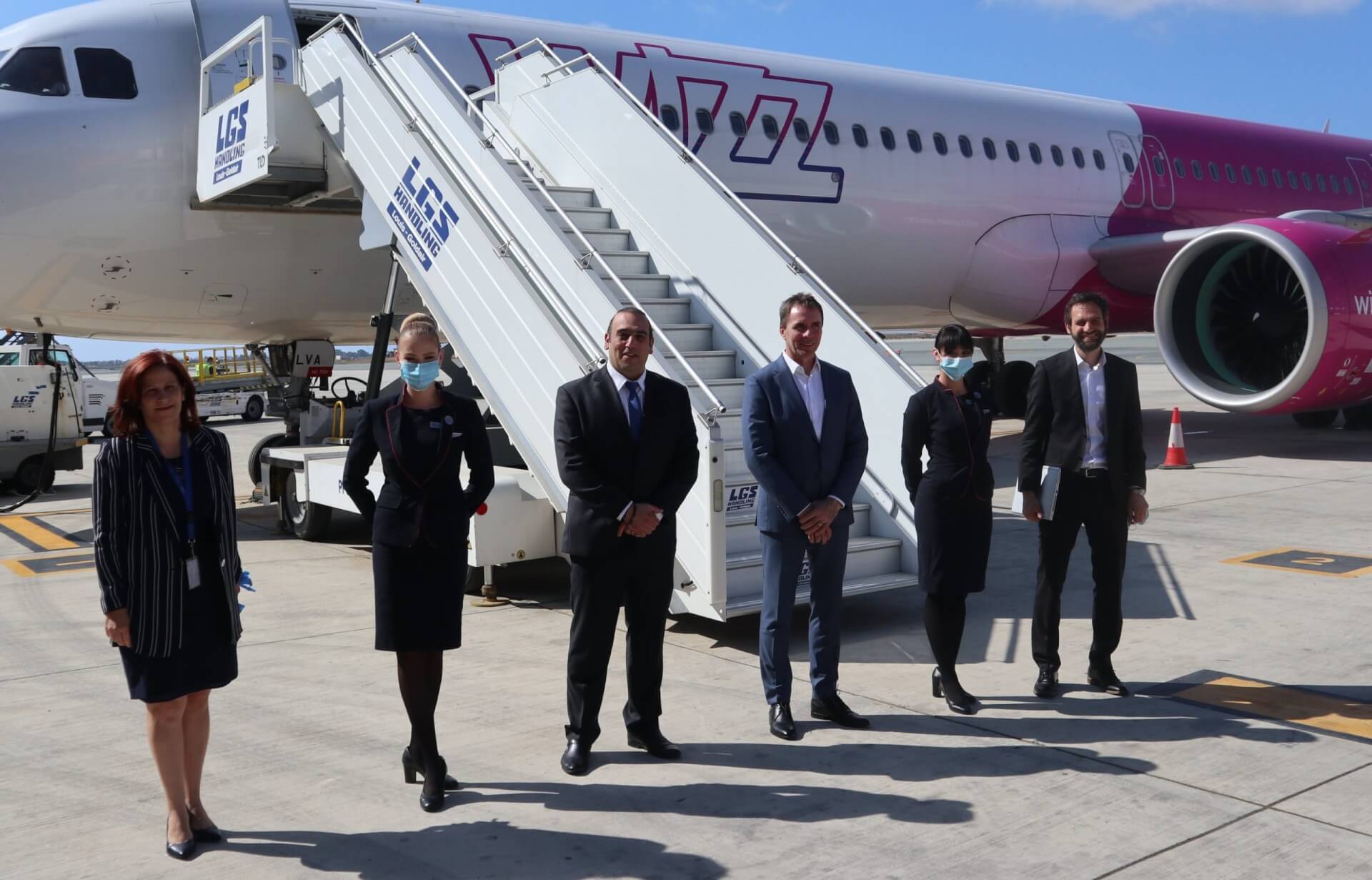 Wizz Air has announced today its 28th base in Larnaca. The airline will base 2 Airbus A320 aircraft at Larnaca airport in July 2020. Along with the establishment of the new base, Wizz Air announced eleven new services to seven countries from Larnaca starting from July 2020. Seats on the new routes can already be booked on wizzair.com or on the airline’s app from as low as EUR 24.99.

Wizz Air’s history in Cyprus dates back a decade when the first flight landed in December 2010. The airline has carried over 800 thousand passengers to and from Cyprus in 2019. Larnaca will become Wizz Air’s 28th base. As part of WIZZ’s expansion, the airline continues to increase its operations in Cyprus by 60% and becomes market leader.

The base establishment in Larnaca will create over 100 new direct jobs with the airline and even more jobs in associated industries. The 2 Airbus A320 aircraft will support the operations of eleven new routes to Athens, Thessaloniki, Billund, Copenhagen, Dortmund, Memmingen, Karlsruhe/Baden Baden, Salzburg, Suceava, Turku, Wroclaw totalling in one million seats on sale from Larnaca in 2020. Wizz Air’s extensive network will support Cyprus’s economy as well as connect the island with new and exciting destinations.

Today’s announcement comes as the new era of sanitized travel begins at Wizz Air. The airline recently announced a range of enhanced hygiene measures, to ensure the health and safety of its customers and crew. As part of these new protocols, throughout the flight, both cabin crew and passengers are required to wear facemasks, with cabin crew also required to wear gloves. Wizz Air’s aircraft are regularly put through an industry-leading fogging process with an antiviral solution and, following WIZZ’s stringent daily cleaning schedule, all of the airline’s aircraft are further disinfected overnight with the same antiviral solution.

By adding WIZZ Flex to a booking, passengers can rest assured that if circumstances change, or they simply wish to travel on a different date, or to a different destination, they can rebook on any WIZZ flight of their choice. Providing that extra layer of protection for passenger bookings, is a peace of mind during these uncertain times.

Wizz Air will start recruiting young and ambitious candidates for its new base. Cabin crew recruitment days are displayed here.

Speaking at the press conference in Larnaca today, József Váradi, CEO of Wizz Air Group said: ”After ten years of successful operations to Larnaca International Airport, I am delighted to announce our newest base here, as we see the potential and the demand for low cost travel in Cyprus which is one of the most popular and rapidly developing tourist destinations. We are dedicated to developing our presence in Cyprus, and offering more affordable travel opportunities to and from Larnaca, while keeping ourselves to the highest standards of our sanitizing protocols.

“Our state-of-the-art Airbus A320 and A321 neo aircraft as well as our enhanced protective measures will ensure the best possible sanitary conditions for travellers. Wizz Air is the lowest cost producer with the strongest liquidity position in Europe operating the youngest and economically most efficient fleet of aircraft with the lowest environmental footprint. With that in mind I’m confident Wizz Air will make a profound impact on Cyprus’ economic development and the ramp up of its tourism industry.”

Mr. Yiannis Karousos, Minister of Transport, Communications & Works commented: “This entire time, our strategy focused also on the country’s development and the next day. We are therefore pleased to announce that the restoration of Cyprus’ connectivity is launched in the best way possible, as it is combined with the establishment of a base by an important airline, Wizz Air, with flights to destinations with which we did not have adequate connectivity until today, with exceptional benefits for the economy of our country”.

Ms. Eleni Kaloyirou  CEO of Hermes Airports added: “We are very happy to announce today the establishment of Wizz Air’s new base at Larnaca Airport. The choice of Cyprus as the 28th base of Wizz Air at such a crucial time for the aviation industry is a great vote of confidence for us and highlights the rich prospects of Cyprus as a destination. We are confident that through the expansion of our fruitful cooperation we will significantly increase the connectivity of Cyprus to destinations we strategically target for better access, with a significant benefit for our tourism industry and the Cypriot economy at large”.