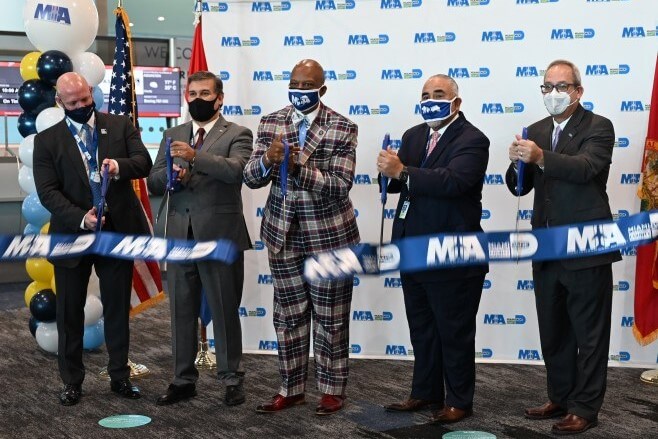 “Congratulations to MIA and to Eastern Airlines for establishing nonstop service to the beautiful, historic city of Asunción,” said Miami-Dade County Mayor Daniella Levine Cava. “We look forward to expanding our County’s tourism and trade connections with Paraguay, as we work to safely build back our economy in the coming months.”

A Miami-Dade County trade mission to Paraguay in November 2019 led by County Commissioner Javier D. Souto, Vice Chairman of the Miami-Dade Tourism and the Ports Committee, that included MIA Director and CEO Lester Sola, PortMiami Director and CEO Juan Kuryla, and MDAD staff, was the first meeting with Asunción officials to discuss establishing the new route and increasing bilateral trade. After meetings with several government and private sector leaders, including Paraguay’s Ministry of Commerce and Tourism and the President of Paraguay’s Civil Aviation Authority, both sides agreed to work together on creating the Miami- Asunción service.

“Congratulations to Aviation Director Lester Sola and his staff for working tirelessly over the last year to create this new nonstop route between Miami-Dade County and Asunción, one of the oldest cities in all of South America,” said Commissioner Souto. “After our trade mission to Paraguay just more than one year ago, it gives me great joy to see this venture become a reality. We look forward to welcoming more travelers from Paraguay to our County, as well as increasing bilateral trade between our two regions, thanks to this new direct service by Eastern Airlines.”

“Thanks to the efforts made by national authorities, in particular the Ministry of Foreign Affairs and the Embassy of Paraguay in Washington D.C., along with representatives from Eastern Airlines and Miami-Dade County, the nonstop connectivity of passengers and cargo between Paraguay and the U.S. will soon become a reality, for the benefit of both nations,” said Justo Apodaca, Consul General of Paraguay in Miami. “Paraguay has a strategic geographic location in the heart of South America that provides fast and easy access to our residents as well as those in neighboring countries. We value Eastern’s interest in relations with our country, highlighted this year in the efficiency demonstrated by humanitarian flights during the pandemic, which provided the repatriation of more than 1,000 compatriots and resident foreigners, in coordination with the Consulate General in Miami and the Paraguayan authorities.”

“We are pleased to see Eastern Airlines increase their presence at MIA and further expand our route network with South America,” said Director Sola. “Eastern was one of the first airlines to resume service at MIA with repatriation flights during the pandemic, so we greatly appreciate their commitment to our airport and to Miami-Dade County.”