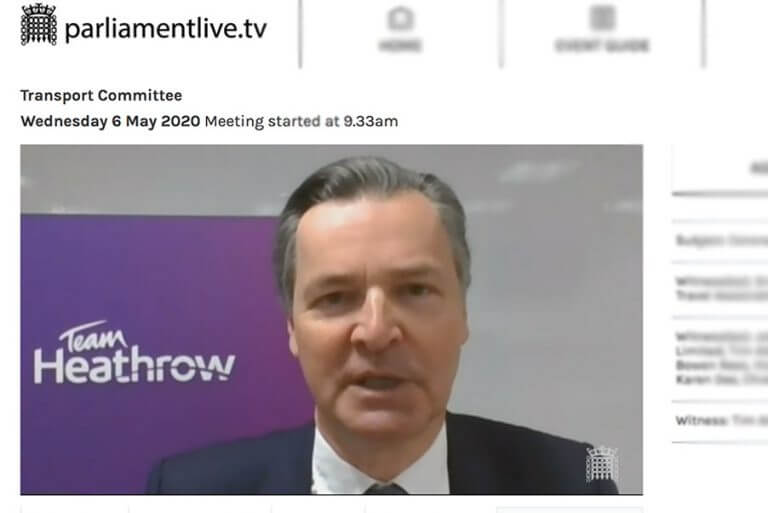 Giving evidence to the Transport Select Committee today John Holland-Kaye, Chief Executive Heathrow Airport, further heated up his airport’s campaign for the UK Government to take a lead in setting a Common International Standard for aviation health screening – “as they have done for security.” Heathrow wants these standards agreed in six weeks – by mid-June.

Also giving evidence on behalf of the 40+ regional airports of the UK and Crown Dependencies, Deb Bowen Rees, Vice Chair of the Regional And Business Airports Group (RABA), and CEO Cardiff Airport, also stressed the importance of the “Restart-Recover” task force, echoing Heathrow: “It needs to come out with internationally agreed measures quickly. If we don’t get clarity, airports will have to introduce local initiatives, which doesn’t help with passenger confidence.”

Stressing that “regional airports are not just businesses but critical infrastructure, and vital to the government’s ‘levelling out’ policy to spread economic growth to regions,” Bowen Rees said the government now had to move forward with the Regional Air Connectivity Review originally announced at the time of the February FlyBE collapse, but since overtaken by events. “There is a huge opportunity to fill the gap in the market left by FlyBE, but for domestic routes to start we need to create a favourable framework to give the airlines confidence. This means ensuring as much clarity as possible on support for public service obligation (PSO) routes, and Air Passenger Duty.”

Because regional airports are “critical regional infrastructure” Bowen Rees also told the Select Committee that “long term consideration now needs to be urgently given to supporting the disproportionate cost burden of regulation on regional airports” – especially the high cost of safety and security which is state-assisted in many other European countries.