A close call between a two passenger planes above Sydney airport was the result of another aircraft mishearing directions from the control centre, an investigation has found.

A Singapore Airlines flight was preparing to land in Sydney on February 9 2020 but bad weather left the pilots of the Airbus A380 unable to land on the first attempt.

The crew advised Sydney Airport air traffic control of the missed approach and were told to turn right onto a heading of 270°.

However the pilots misheard the instruction and turned left. 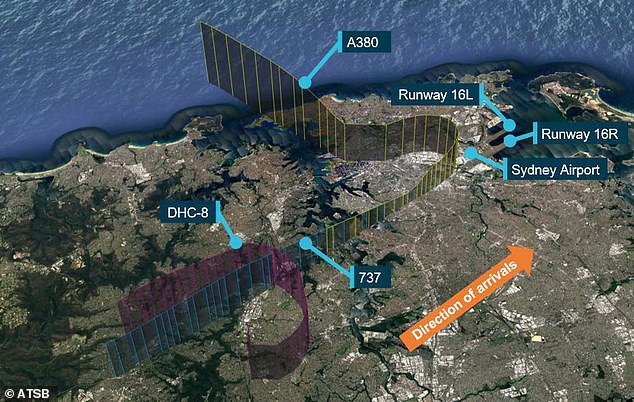 The plane was then on a path that would bring it too close to another passenger plane and was ordered to turn right and immediately climb.

The second passenger plane was also instructed to turn right to maintain the necessary separation between the aircraft.

However that order then left the second plane flying too close to a third passenger plane.

The situation was resolved without any further incident but could have been avoided altogether if air traffic control had responded differently, an investigation by the Australian Transport Safety Bureau found.

The pilots of the Singapore Airlines flight were likely experiencing a high workload managing a high-energy aircraft state and recovering from difficult winds and the missed approach, ATSB acting Director of Transport Safety Kerri Hugh said.

Air traffic control missed an opportunity to confirm the order had been correctly noted, she said.

‘The flight crew omitted the direction of the turn from their readback, which was not corrected by ATC.

‘This was a missed opportunity to correct the misheard instruction.

‘This incident highlights the importance of flight crew completing full readbacks, as well as controllers correcting any readback discrepancies immediately.’