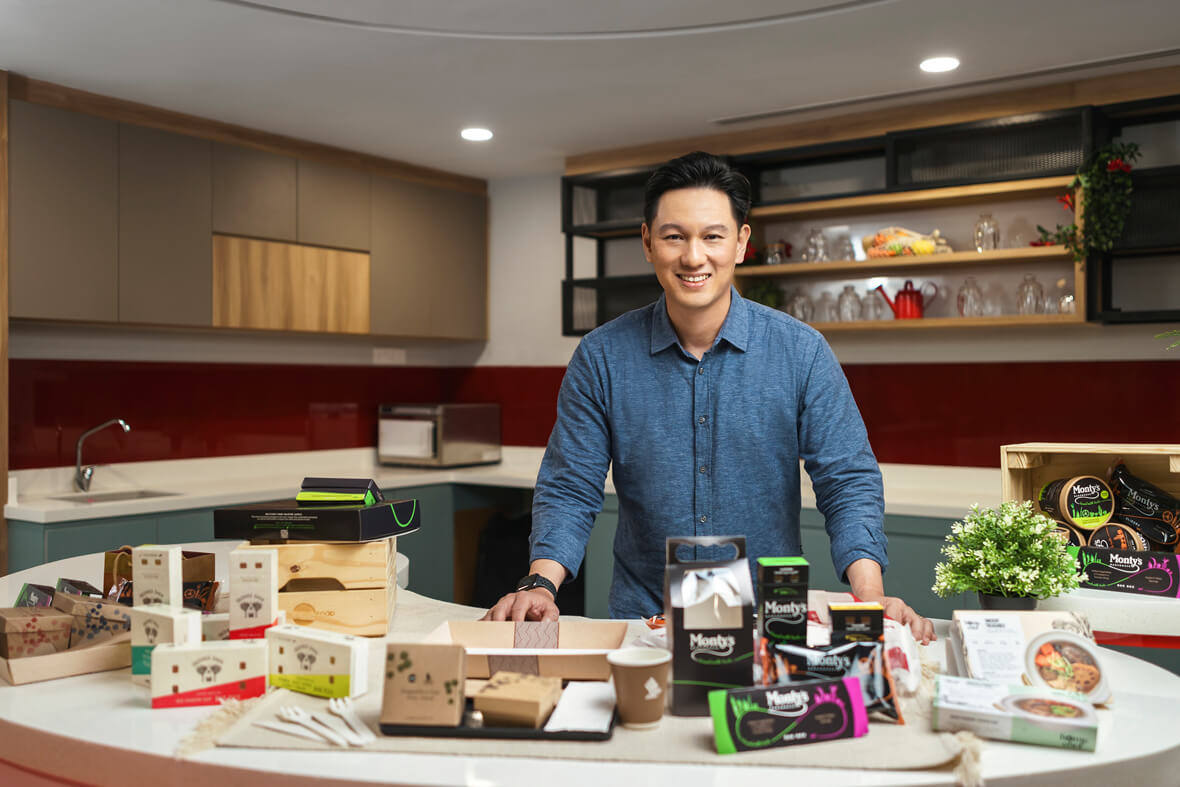 At the top of Kerry Mok’s to-do list when promoted to the role of President and Chief Executive Officer of SATS in mid-December 2021 was one item: execute the acquisition of Worldwide Flight Services (WFS).
Mok explained the thinking behind the proposed purchase, announced on 28 September, and how it came about, to ARGS in a November interview. The acquisition will be another major consolidation move in the global ground services industry. It comes hot on the heels of the finalisation in August of the acquisition of handler Menzies Aviation by Kuwait’s large logistics and infrastructure group Agility, which also owns National Aviation Services.
As a member of the SATS executive team and Chief Executive Officer of its Food Solutions business for two years, Mok was up to speed with the due diligence process and management focus on whether SATS should proceed with the WFS acquisition.
Bringing the SATS and WFS businesses under one roof gives the Singaporean company the opportunity to significantly strengthen its global cargo footprint. WFS is rated as the world’s largest air cargo handling firm with revenues of €1.72 billion (US$1.8 billion) for the year ending 31 March 2022. It has a different business mix compared to other global handlers because its primary focus is cargo, with passenger handling a secondary concern. “About 80% of our business is cargo and it takes up about 90% of our effort,” said WFS Chief Executive Craig Smyth when interviewed by ARGS earlier this year.
Mok was aware that Smyth had been to Singapore to pitch a possible sale around 2017-2018. “He approached SATS and wanted to partner with us to grow,” Mok said. At that time, WFS was owned by private equity player Platinum Equity. But SATS was not ready for a deal back then, and Platinum went on to sell WFS for €1.2 billion ($1.4 billion) to global investment firm Cerberus Capital Management in 2018.
“At that time our strategy was much more Asia focused,” said Mok. “And frankly, the size and portfolio of the business was not where WFS is today. So, we looked at it and said, no, I do not think we are ready for that.”
The importance of air cargo during the pandemic sharpened the SATS focus on this sector though, Mok explained. “When we look at our previous expansion overseas, most of our investments were in the Asia-Pacific region. But during the pandemic we had a very deep look at our strategy, and we decided if we are going to go big and we are going to go big on cargo, we need to be global.
“We have seen how cargo is a very resilient sector; no matter what happens, although there could be a dip, it always comes back. So, we are quite confident that cargo is a segment where there are a lot of structural tail winds,” said Mok.

Acquisition talks
The renewed focus on cargo led SATS back to WFS, and the two started bilateral discussions about an acquisition in November 2021, building on the relationship established a few years before. As Mok recalled, WFS owner Cerberus Capital was not necessarily looking to exit at the point SATS came back into the frame. WFS had completed a major debt refinancing early in 2022. It was also integrating three businesses it had acquired and Smyth’s management team was working hard on its recovery and growth plan.
In addition, the outlook for 2022 at that time did not include headwinds like the impact of Russia’s invasion of Ukraine and the prospect of global economic recession. These are now taken into account, but have not put SATS or WFS off course with the renewed deal discussions.
Mok, who has extensive experience in major corporate deals and was the M&A (merger and acquisitions) lead for DHL’s Exel Singapore business, has a definite sense of what SATS is looking for with the WFS deal. “We were very clear about the initial value [the deal will bring] before we went to the detailed due diligence. We wanted to make sure that we were talking to a company that could bring value to us and that’s why we did an initial ‘outside-in analysis’.”
This homed in on what had changed at WFS from the first engagement four years ago, and how Smyth had built the business, organisation and team. “We asked how this could actually help us transform,” said Mok.
From his long experience at DHL in logistics and supply chain management, Mok readily understands the benefits that consolidation can bring in this sector, both for providers and customers, with new operating models borne out of M&A activity.
SATS has completed numerous acquisitions in the Asia-Pacific and follows a deal template. “As a Singapore-based company, we’re very detailed in how we look at things. Maybe that’s just the way we are brought up as well as in our DNA,” said Mok. With the help of external consultants, SATS undertook 10 months of due diligence. “That gave us a lot of comfort that we have done our homework in understanding WFS as a company,” he added.

Timeline
The deal was officially announced in September, with SATS to acquire WFS for a cash consideration of €1.18 billion. SATS was poised to unveil a clear funding plan for the transaction as ARGS closed for press. An extraordinary general meeting will be convened most probably in January to gain shareholder approval for the deal, followed by a rights issue in February or March 2023, said Mok. It is hoped the deal will close by the end of March subject to approvals from competition authorities and regulators in various jurisdictions.
In a September press statement Mok said: “This is a transformational opportunity for SATS and our proposed acquisition of WFS will create a global leader that can become the go-to provider of mission-critical aviation services. From our hub in Singapore, and in our newly combined markets, SATS and WFS will be at the heart of global trade flows, operating in the world’s busiest airports and supporting the biggest companies.”
The combination of SATS with global air cargo powerhouse WFS is described in a presentation as a “unique opportunity to acquire a cargo handling asset of scale”. The presentation says WFS handles 6.3 million tonnes of cargo annually at 114 cargo stations in 15 countries, while SATS handles 2.8 million tonnes of cargo annually at 22 cargo stations in 8 countries. The next-largest air cargo handler is Swissport, which handles some 5 million tonnes annually.
The deal will propel SATS to a global leadership position in air cargo, creating a “comprehensive Americas-Europe-APAC cargo handling network”. There is virtually no overlap in stations and services between SATS and WFS, with SATS concentrating on Asia-Pacific while the WFS network is focused on the Americas and Europe.
Consolidation plan
“We are not looking at cost savings to drive our synergy,” said Mok. “We’re looking at commercial synergy to drive our benefit. When we look at this, despite the upcoming recession, which we think is going to have a short-term impact on us, we believe we can use this opportunity to create value for customers and hopefully attract more customers to join our platform.” WFS has been creating a global air cargo platform, which is a path aligned with the thinking of SATS, and will be a major development priority, he said.
According to Mok: “Consolidation is not just for the sake of consolidation, but it is also about driving a new operating model. One thing about logistics and supply chain which I grew up with is that it’s all about standardisation of products and services.”
“What we have decided in the next 12 to 18 months is we wanted to give credit to Smyth’s team and a very clear runway for him to continue to drive the growth of the business,” said Mok. “They have a very strong business plan that they have put in place. But at the same time, we said that there are three key things that we will do. One is commercial synergies, and we will be driving commercial synergies between both teams. So, there’ll be a [joint] team that is set up to drive that [and] look at global accounts.”
“The second area that we will be working on is on operational excellence. Craig and his team have been working on this for quite some time. We will decide which is the best platform for us and create the operational synergy where we think we are going to create value for both businesses. And the third one, frankly, is for people and culture. We’re very clear and very deliberate: this is not about SATS coming in and imposing our views and values. WFS is equally as big, and has its own history as well. We are very respectful of that and in fact, we want to celebrate that history. So, we’re going to slowly introduce each other’s values. We are going to co-create values together for the future.” This will include an exchange of staff between the two companies.
The two brands will continue to operate under their own brand names, with WFS operating as a subsidiary of SATS.

Rebuilding in Singapore
As Mok works to get the WFS deal fully across the line, he can now see business volumes recovering in the SATS world after a torrid couple of years. In November, SATS said in its half-year results for the six months to the end of September 2022 that flight and passenger volumes reached 60% of pre-pandemic levels during this period. It expects recovery to accelerate through the year-end and into 2023.
It has been a tough period for SATS, with the business losing about half of its headcount at its Singapore Changi base as the result of the “great resignation” with staff leaving during the pandemic for other industries. The company has been working with its airline, government and regulatory partners to bring its workforce back ahead of the curve to ensure they can meet the ramp-up in operations, said Mok.
“Basically, by the year-end, some 50% of my workforce would have been hired within the past year,” said Mok. “I think you see similar things with my counterparts elsewhere. Just rehiring, retraining and creating that muscle memory for operations has got to be a key focus for us going forward. We believe that, right now, we’ve got the warm bodies, but are we at the same operating productivity level? The answer is no.”
The operational challenge is one faced by SATS, WFS and all other players across the globe and is likely to remain for months – and perhaps years – to come.
From 2023, though, the anticipated combination of SATS and WFS will be tackling it jointly from its leadership position in the ground services and air cargo industry.