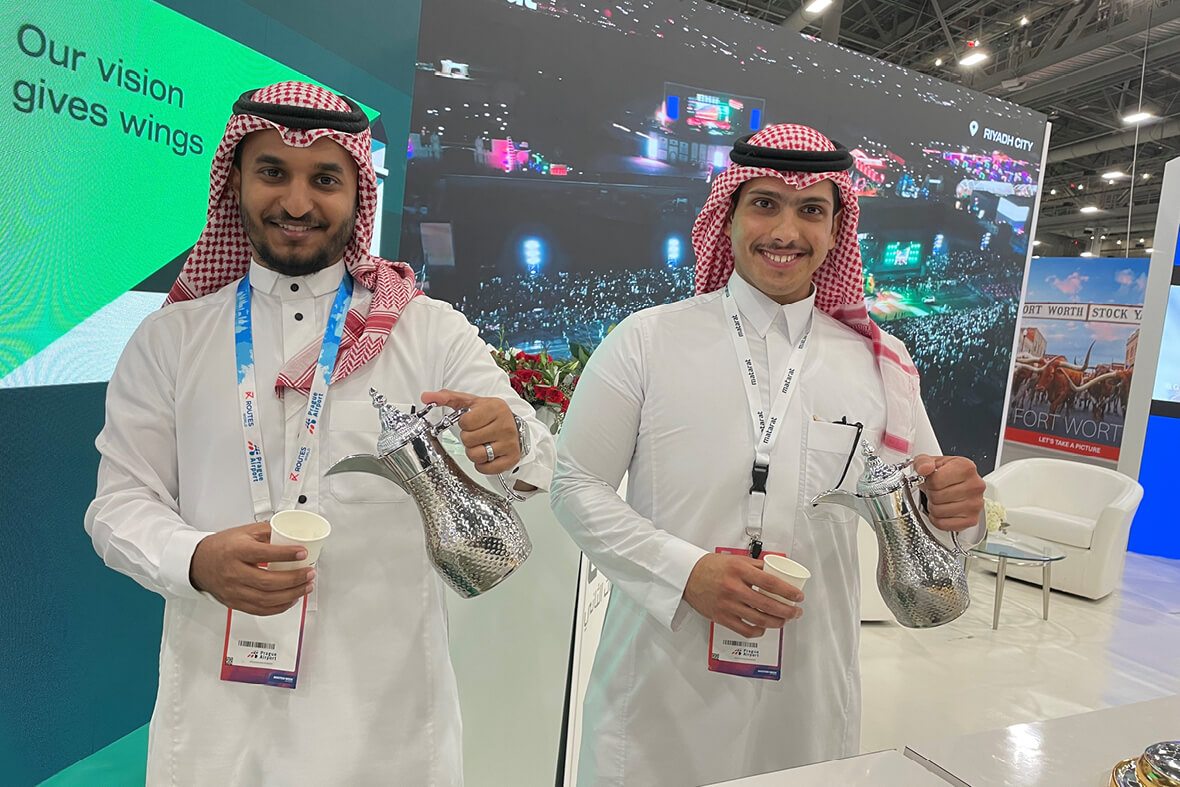 Saudi Arabia’s Matarat Holding Company, a new name for many delegates at Routes, put down a strong statement of intent at the 2022 show. With a pair of large stands, a big delegation, traditional Saudi Arabian coffee, and dates on offer, as well as a musician serenading visitors playing an 11-stringed Oud guitar, the country is on a major marketing offensive to match its desire to become a significant player in the global travel arena.
The Kingdom’s huge travel and tourism ambitions are illustrated by a target to welcome 100 million local and international visits annually by 2030. This is the first target in an overall strategy to increase Saudi Arabia’s airport capacity to over 330 million passengers annually, increase air cargo capacity to 4.5 million tonnes per annum, and increase connectivity by serving over 250 global destinations.
Stimulating air travel is one component of Saudi Arabia’s comprehensive Vision 2030 strategy aimed at diversifying the country’s economy away from its dependency on oil and creating a leading global economy. While the focus at Routes was on airport development and network building, the country’s airlines have equally big plans. Flag carrier Saudia is expanding its fleet and network from its Jeddah hub while the Kingdom is preparing the launch of a second major international carrier to be based at capital Riyadh.
At Routes, the Saudi presence came together as one for the first time encompassing Matarat, Riyadh Airports, Jeddah Airports Company (Jedco), Dammam Airports Company (DACO), Cluster2 (which operates 22 other airports in the country), the Saudi Air Connectivity Programme (ACP ), the General Authority of Civil Aviation of Saudi Arabia, (GACA). and the Saudi Tourism Authority. Please Add GACA
A total of 28 airports in Saudi Arabia were organised under the Matarat Holding Company in February 2022, while at the same time the launch of Jedco and Cluster2 took place. At an event in Riyadh, GACA and Matarat said: “The announcement of the institutional transformation of airports and assigning their operation to the private sector, comes in implementation of the noble royal decree to separate the legislative aspect from the operational one, and reflects the practical steps applied for one of the objectives of the civil aviation sector strategy approved by the Council of Ministers to develop Saudi airports, and raise their operational efficiency, to provide the best and finest services to the passengers.
“Furthermore, to transform the Kingdom’s airports into world-leading airports and create promising investment opportunities that will contribute to advancing the national economy and promoting the Kingdom’s gross domestic product (GDP),” said the statement.
Bringing the airports under one umbrella demonstrated a unified front for the Kingdom as Matarat embarks on what it describes on its website as “a civil aviation industry revolution”, with itself as a “key player in making the Saudi economy skyrocket through the privatisation of the sector and transforming all of our Kingdom’s airports into thriving gateways”.
At Routes, the Saudi team celebrated its success in attracting new service with a photocall with new airline partner Wizz Air. The low-cost player is launching a string of routes to Dammam, Jeddah and Riyadh from a variety of European cities as part of a major expansion into the country, announced earlier this year.
In a further sign of its eagerness to attract traffic, in July GACA announced a cut in airport charges at Dammam, Jeddah and Riyadh of between 10% and 35% to increase competitiveness at these airports.