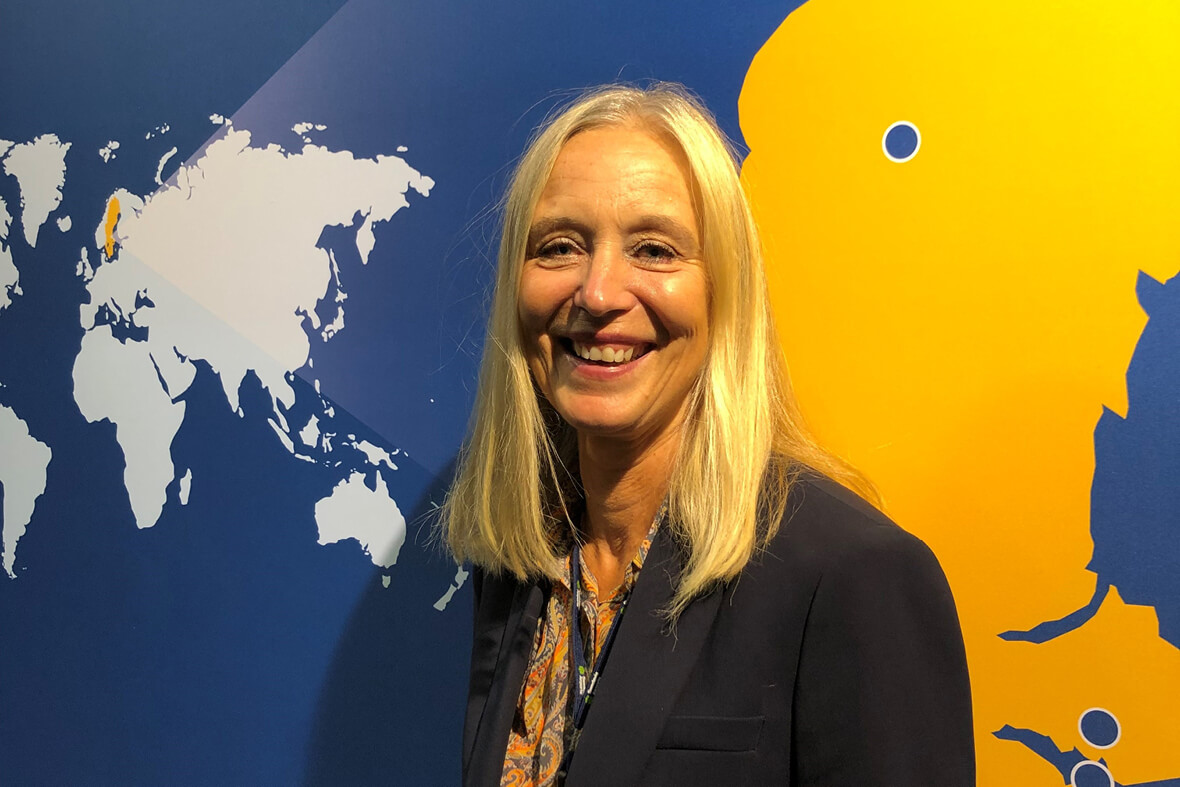 One of the first exhibitor stands to greet delegates arriving onto the show floor at World Routes in Milan was Swedavia Airports.
Swedavia is renowned for serving one of the best fresh coffees from its barista at Routes shows, and the tasty brew was available again in Milan. While this feature of its presence is important to delegates, another major highlight of its appearance, and one that was emblazoned across its stand, is its environmental credentials.
Specifically, Swedavia is immensely proud of being the world’s first airport group to achieve net zero greenhouse gas emissions. “In April 2021 we managed to reach our goal – zero fossil carbon dioxide emissions from our own airport operations,” said Elizabeth Axtelius, director aviation business at Swedavia.
“We have been working hard on this for many years,” said Axtelius. “For the whole industry it is something that is extremely important. A few years ago, nobody was looking at this challenge [decarbonisation]. Maybe we will not have a new route because of [our goal of achieving zero carbon emissions], but everyone is looking at what we are doing.”
A couple of weeks after Routes, Swedavia’s climate transition work was honoured in ACI Europe’s annual awards with Stockholm Arlanda named as Eco-Innovation Airport of the Year. ACI Europe said Stockholm is held up as “a pioneer in the forefront of sustainable development, [and] is leading by example by becoming fossil-free in a short timeframe” through its systematic and consistent approach.
State-owned Swedavia owns, operates and develops a network of Swedish airports, with the largest being Stockholm and Göteborg Landvetter. It set the sustainability target a decade ago when it (article continued above right top) emitted about 8,000 tonnes of fossil carbon dioxide annually, a figure that has now been reduced to zero.
Swedavia has a raft of sustainability initiatives including sustainable aviation fuel and infrastructure for electric aircraft. Measures implemented to transform Swedavia’s operations include having all airports today run on renewable electricity and heating/cooling, using renewable fuel for the uninterruptible power supply, and having Swedavia’s fleet of vehicles powered by electricity or renewable fuels.

Return to service
As Swedavia stresses its sustainability achievements, it is welcoming back carriers to its airports as traffic returns. Swedes, many of whom have saved a lot of money during lockdowns, are eager to begin travelling again.
And the airport’s main airline customers are reintroducing services. During the third quarter, nearly 4.4 million passengers flew to or from Swedavia’s airports, over double the number flown in the same period in 2020. However, passenger volume is still only 40% of pre-pandemic levels.
Ryanair is moving strongly into Stockholm, with the airport becoming one of its new bases. It will base two aircraft there and will have launched 20 new routes from the Swedish capital to European destinations, including Venice, by the end of March 2022.
The Irish carrier joins Finnair and Eurowings in making recent announcements to establish a base at Stockholm, said Axtelius. Eurowings will place five aircraft at Arlanda and launch 20 routes from summer 2020.
Finnair, meanwhile, is establishing a base at the airport for long-haul services to Los Angeles and New York using Airbus A350s. These are in addition to previously announced direct routes from Stockholm to Miami, Phuket and Bangkok. “This is a very important investment by Finnair. The US is an extremely important market for Swedish trade,” said Axtelius. In addition, SAS is resuming service on three long-haul routes from Arlanda to US destinations. Another interesting new route is from Icelandic low-cost carrier PLAY. It will launch service between Gothenburg and Reykjavik starting next spring.
Swedavia has worked on developing air connectivity within as well as to and from Sweden, and the recovery is well underway. “Most of our year-round routes are back,” said Axtelius. “Then our priority is working on increasing frequencies.”
To assist airlines, Swedavia plans to keep its charges at 2021 rates next year, said Axtelius. “In 2021 we did not increase charges and in fact kept them at 2019 levels. To be able to recover we need to be competitive during this period.”